At XPT Experiences, the thing people are most fascinated by (and apprehensive) about is the ice bath. Sure, the novelty of our pool training is intriguing and, once they actually get going, challenging—but there’s something about the cold that captivates their imagination and perhaps makes them a little apprehensive. Yet, cold water immersion (CWI) is a core component of the XPT lifestyle and our active Recovery pillar.

Over the past 20 years, co-founders Laird Hamilton and Gabby Reece have found cycling time in the sauna with a dip in an ice bath provides an incredible boost in their recovery. This isn’t just anecdotal, either.

There’s a bevy of research demonstrating the benefits of getting chilly. Multiple studies found CWI significantly reduced the loss in maximal strength and delayed onset muscle soreness (DOMS) for up to 96 hours post-exercise. The skin temperature decrease resulting from ice bath immersion lowers nerve conduction velocity, which limits muscle spasms and pain sensations. The vasoconstriction that follows alters blood flow to the point that it reduces lymphatic and capillary cell permeability, which limits inflammation and minimizes swelling. 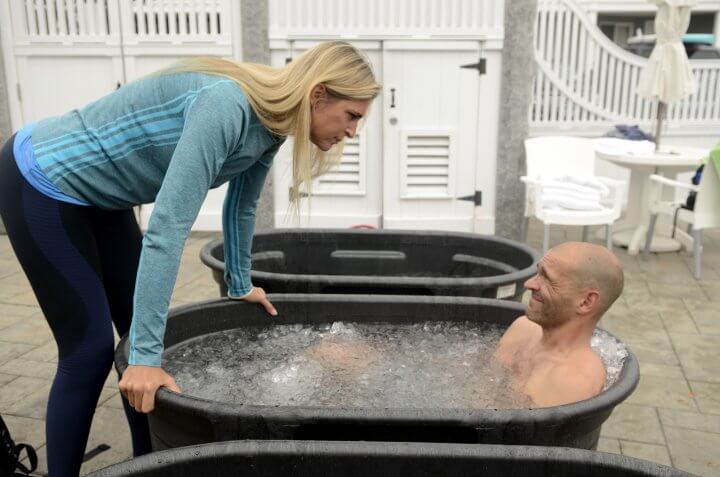 And yet, for all the demonstrated advantages it provides, getting uncomfortable with ice water immersion is still something a lot of people struggle with—even though most of the time it’s just a mental hurdle they need to clear. It’s something Dr. Andy Galpin—a muscle physiologist at Cal State Fullerton, XPT advisor and co-author of the bestselling book Unplugged—sees frequently.

“Almost everyone likes getting into heat, whereas most people’s initial reaction to an ice bath is ‘Get me out of here now!’” said Galpin. “That means if you’re presented with an either/or choice, most of us would prefer to just stay in the sauna. But the evidence is pretty clear that a hot/cold contrast is better than just heat alone. So then, the question becomes how to convince people to deal with the cold. We need a real-world solution, because just telling someone to do something isn’t going to create adherence when you’re not around—if it’s unpleasant, a lot of people won’t do it, even if they understand the benefits. That’s where combining heat and ice comes in. Do the easy thing (getting warm) first, so that once someone feels good, they’ll be more willing to tolerate a short dose of cold afterwards.” 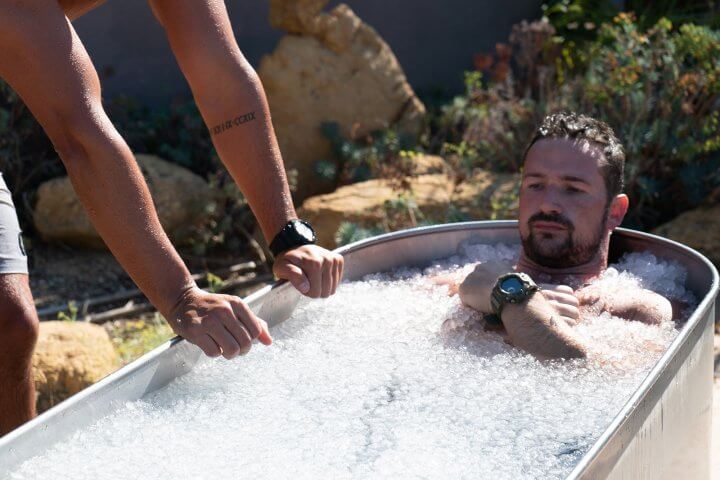 Galpin works with a broad range of athletes, including top level mixed martial artists and fighters. Due to the volume and intensity of their training, new modalities have to be introduced carefully and thoughtfully, so they don’t get overwhelmed with yet one more thing to do. Despite the challenges, Galpin has figured out a way to utilize contrast therapy so the athletes he advises can reap the benefits of CWI, while avoiding potential objections.

“When fighters have been training all day, they’re worn out physically and cognitively and are hypocaloric. The last thing they want to do is jump in an ice bath, let alone stay in for several minutes. It’s just one more demanding thing after they’ve already been bombarded with challenges for hours on end,” said Galpin. “With this context in mind, I use the heat of the sauna to relax them and then coax them into the cold for 30 seconds or a minute. They can handle that. Instead of a single long contrast therapy session that might be too grueling, we do several shorter rounds of heat followed by ice. This way they get the cold-water immersion benefits and overcome their initial reservations.”

Galpin points to the increasingly broad adoption of contrast therapy in pro and college sports, and the inclusion of it in the modalities used by state-of-the-art facilities like the UFC Performance Center as an indicator this isn’t some passing fad, but rather an effective practice that’s here to stay.

“If you look across professional sports, a huge percentage of teams have adopted contrast therapy,” he said. “For example, just about every NCAA Division I college has it available in the athletic training facilities. We need to be careful to avoid the logical fallacy of authority bias, as we know that just because something’s popular doesn’t mean it has value. But in the case of cold-water immersion and heat exposure, professionals who are responsible for the wellbeing of the best athletes on the planet are only going to utilize a method if it’s working. Such widespread adoption factors into XPT’s evidence-based approach.” 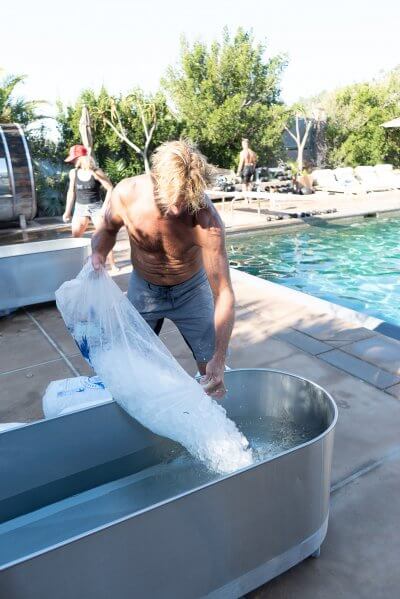 The benefits of contrast therapy aren’t just confined to the many physical advantages of cold cold-water immersion recovery combined with heat exposure. There’s also a mental aspect that cannot be underestimated, according to XPT performance director PJ Nestler.

“We spend so much of our time in temperature-controlled environments that are neither too hot or too cold,” said Nestler. “As a result, we not only switch off the cold shock and heat shock proteins involved in immune function and other important bodily processes, but also make ourselves too comfortable. Then, when we have to perform in harsher conditions, we fall apart. XPT enables people to experience extreme heat and cold in a safe, controlled environment, which allows them to become more resilient and capable. Once you’ve gotten used to the initial shock of the cold, regulated your breathing, and calmed yourself down, you realize that you actually feel great once you get out of the ice bath. As the Fred DeVito adage goes, “If it doesn’t challenge you, it doesn’t change you.”

In the case of cold-water immersion, the bar for challenge is set high—but so is the potential for change. It’s worth consideration for any athlete, but takes tenacity and power of will to step up to the ice bath and climb in, instead of staying content in the sauna. To get yourself or your athletes, over the mindset barrier that’s keeping you out of the cold, follow these steps:

Like any new recovery methodology, this one takes time to acclimate—even more so because of the intense shock to your unprepared system. Know that with time, cold water immersion gets easier and begins to show its benefits in a major way.

Beyond the Ice Bath: How Extreme Exposures Equip You with Coping Tools and Strategies for a Resilient Life

How to Ease Yourself Into Cold Therapy with Cold Showers

Our site uses cookies so that we can remember you and understand how you use our site. If you do not agree with our use of cookies, please change the current settings in your privacy preferences. You can also read more about cookies and similar technologies here. Otherwise, you agree to the use of the cookies as they are currently set.